There’s nothing “fried” about these oven-fried green tomatoes! Plump tomatoes are dredged in flour, and Japanese breadcrumbs then baked until crisp. Serve these along with a simple chipotle ranch dipping sauce and you have yourself a little taste of the south! 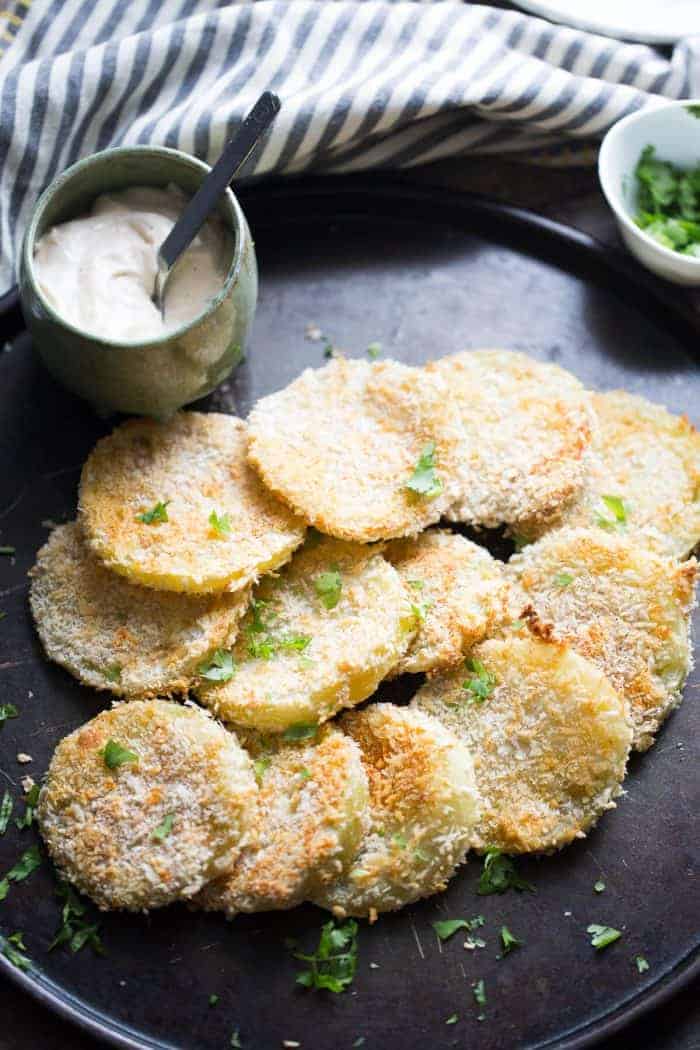 After making these oven-baked pickle chips for friends, it occurred to me that the same recipe and method would work with green tomato slices.

This is great because making deep-fried green tomatoes as I did in my rocking BLT can be messy and time-consuming. Oven-baked green tomatoes are a faster, healthier, and more convenient way of getting the tasty fried tomato taste you want but without the mess, work, and stress of dealing with a hot pot of oil.

What Are Fried Green Tomatoes?

As the name implies they are green tomatoes fried in oils, usually battered first. In our case we’re making them much healthier by using Panko breadcrumbs and an oven to help reduce unwanted fats and greasy oils, making these much more diet-friendly.

Once cooked, you can use these tomatoes as appetizers or as sandwiches and burger fillers. They also work well as a side dish, part of breakfast (with bacon and eggs), sliced and stuffed with hot dogs or brats, loaded like nachos, or any other way you can imagine! 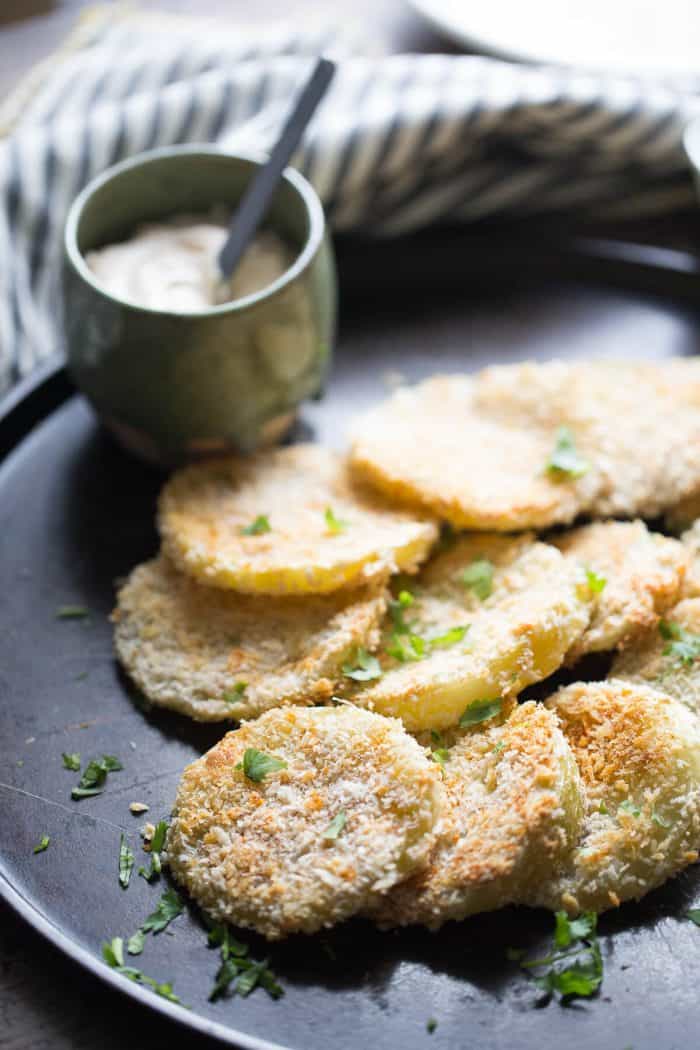 For the exact measurements needed, please see the recipe card below. 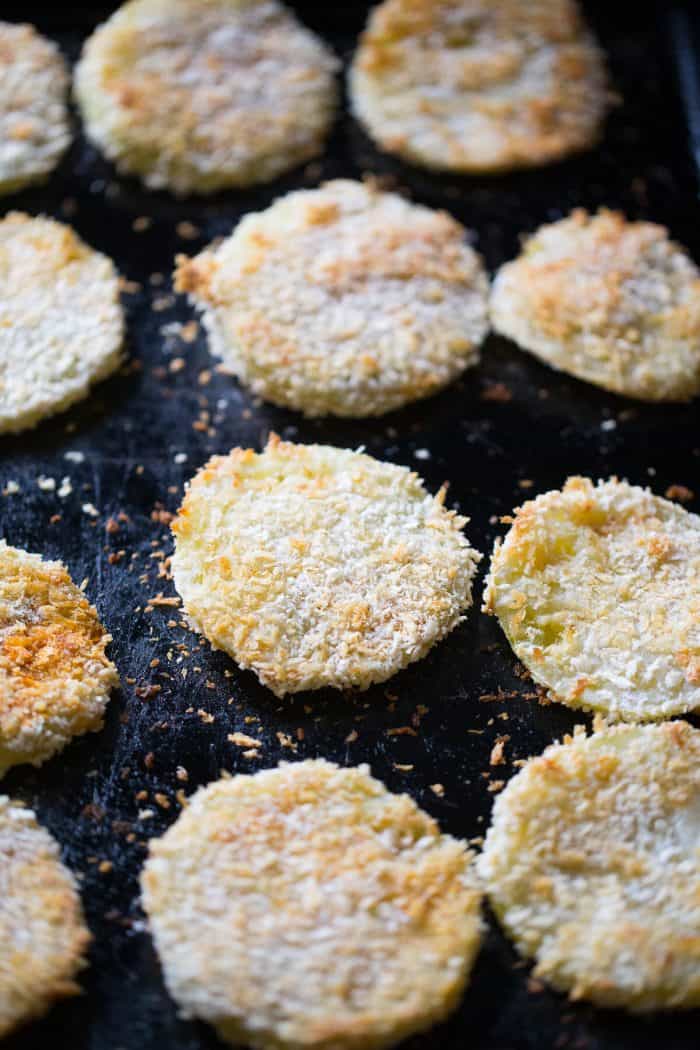 How To Make Oven-Fried Green Tomatoes

STEP THREE – Place flour in a bowl. Lightly beat egg whites in a second bowl and place panko, paprika, cumin, and salt in a third bowl.

STEP FOUR – Delicately press tomatoes into flour, then dredge in egg whites, and finally cover in panko mixture. Place slices on a baking sheet that has been covered in non-stick spray.

STEP FIVE – Bake for 20 minutes, turning once until tomatoes are golden.

STEP SIX– Combine the dip ingredients in a bowl until well mixed and serve alongside your baked green tomatoes. 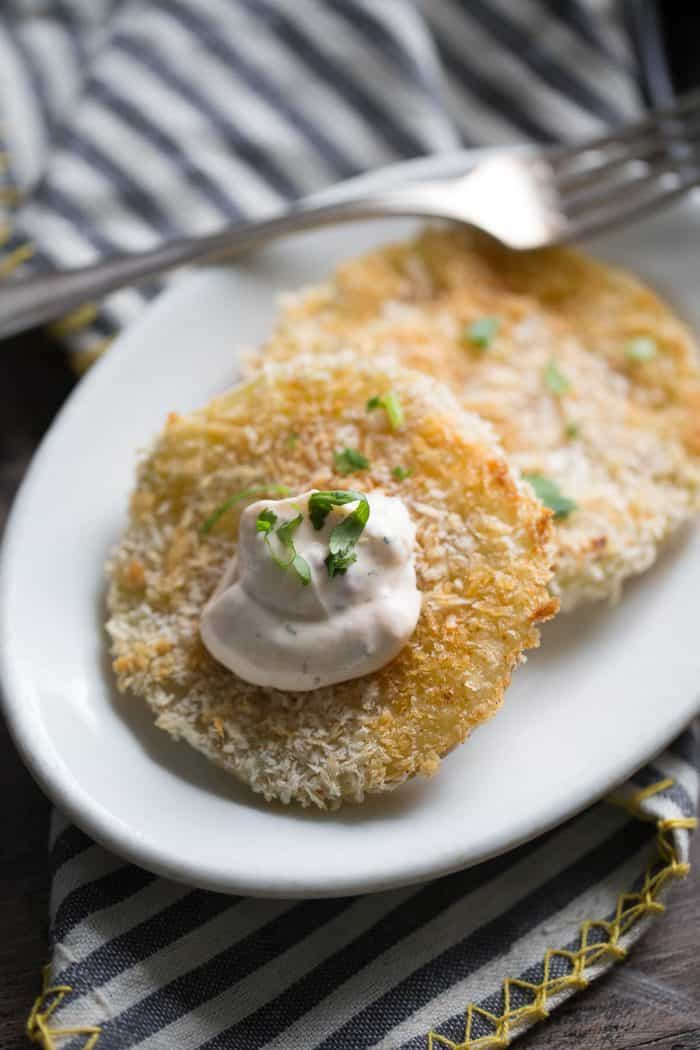 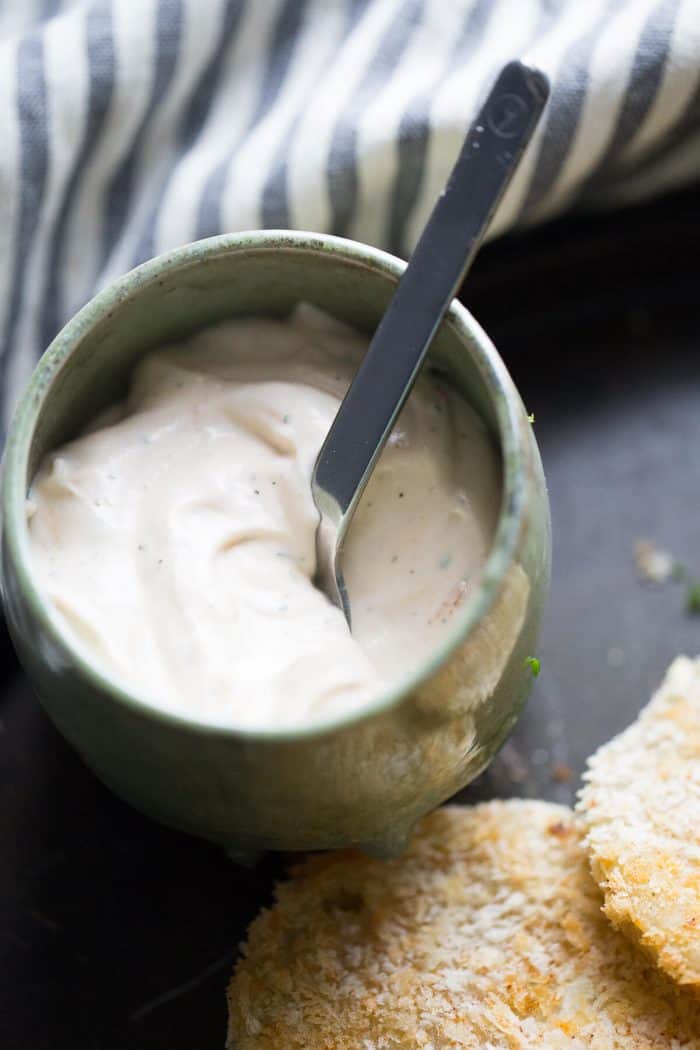 These “fried” tomatoes will have a slightly sour taste to them, but it’s a tangy flavor that’s pleasant and complimentary to the texture of the breading. The breading on these sliced tomatoes is crunchy and flavorful, which helps to mellow out the acidic tomato and while the slices are crunchy, they’re still firm for a good bite without being hard to chew.

How long are baked green tomatoes good for?

I recommend eating these tomatoes don’t the same day that you prepare them as that is when the flavor and texture will be best. the tomatoes will lose crispness when reheated in the oven later.

What Is A Good Dipping Sauce Recipe For These Fried Green Tomatoes?

I served these tomatoes with a chipotle-ranch dipping sauce that is simply made with mayo, Greek yogurt, ranch seasoning, and chopped canned chipotle peppers. The sauce is creamy, spicy, and flavorful! You can omit the chipotle peppers and use jalapenos instead. Or you can stir in mashed avocados for a milder flavor!

Check out these other great fried food recipes you’re sure to enjoy!

Add the warm flavors of fall to your tea, coffee, pancakes, and cocktails with this easy homemade pumpkin spice syrup. This syrup is very easy to make and always adds a little END_OF_DOCUMENT_TOKEN_TO_BE_REPLACED

This roasted pumpkin hummus will be a big hit during your holiday dinners. Serve this tasty pumpkin hummus up as an appetizer for Thanksgiving with fresh veggies. You can END_OF_DOCUMENT_TOKEN_TO_BE_REPLACED

This creamy no-bake pumpkin pie recipe is no ordinary Thanksgiving pie! It is light and fluffy with the creamiest pumpkin filling. When you are ready to break with tradition, END_OF_DOCUMENT_TOKEN_TO_BE_REPLACED