A shrimp boil is the best way to entertain! Shrimp, corn, sausage, and potatoes are slowly boiled together with spices then served with butter and cocktail sauce! This is a fun meal to serve family and friends! 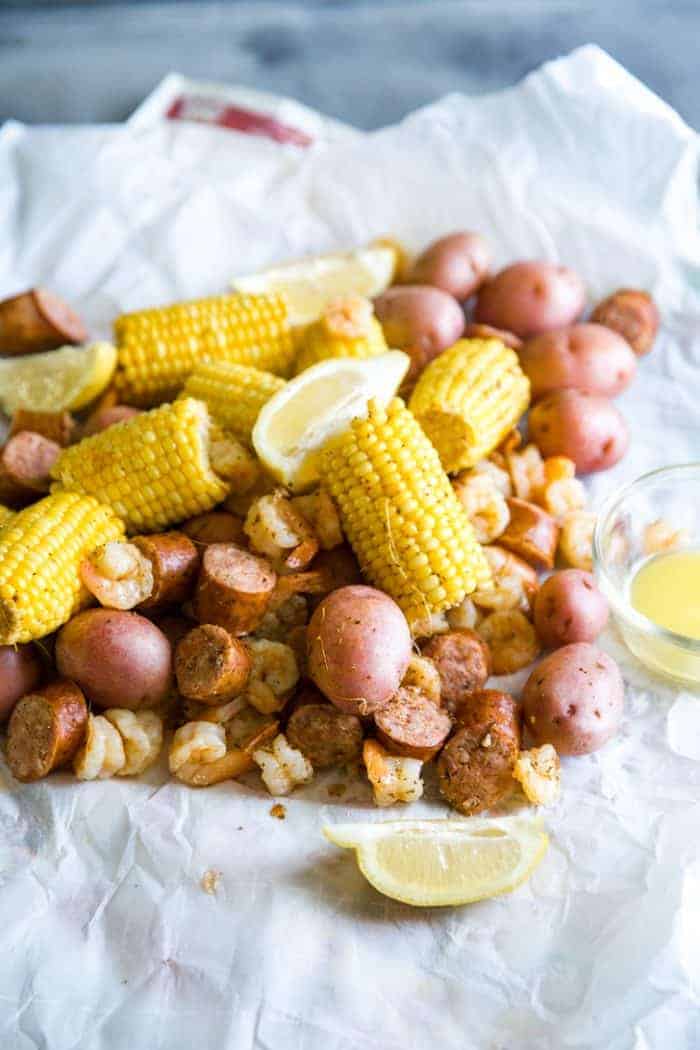 Each summer I think back to when my family went to the “low country” for vacation. The low country being South Carolina. Apparently all of Ohio vacations there. so we felt right at home. I think we northerners really annoy the locals, but I’m ok with that.

South Caroline is one of my happy places. It is so different from Ohio. The sun, the sand, the FOOD…all of it brings me so much joy. 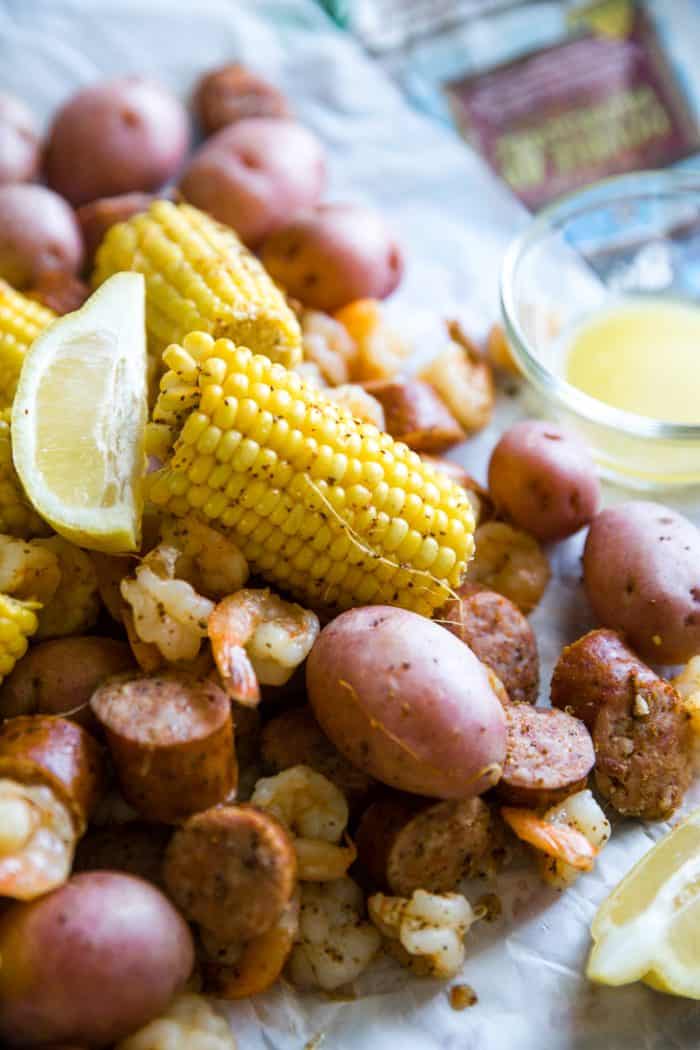 Why Do They Call It Low Country Shrimp Boil?

A low country boil is the southeastern coast’s equivalent to a New England clambake. Fresh shellfish (in this case, shrimp) is dumped into a giant pot with some vegetables and sausage, and seasoning, then rolled onto newspaper alongside lots of melted butter!

The meal was originally known as Frogmore stew; named after the Frogmore plantation and after that disbanded, the name transitioned into Low Country Boil. 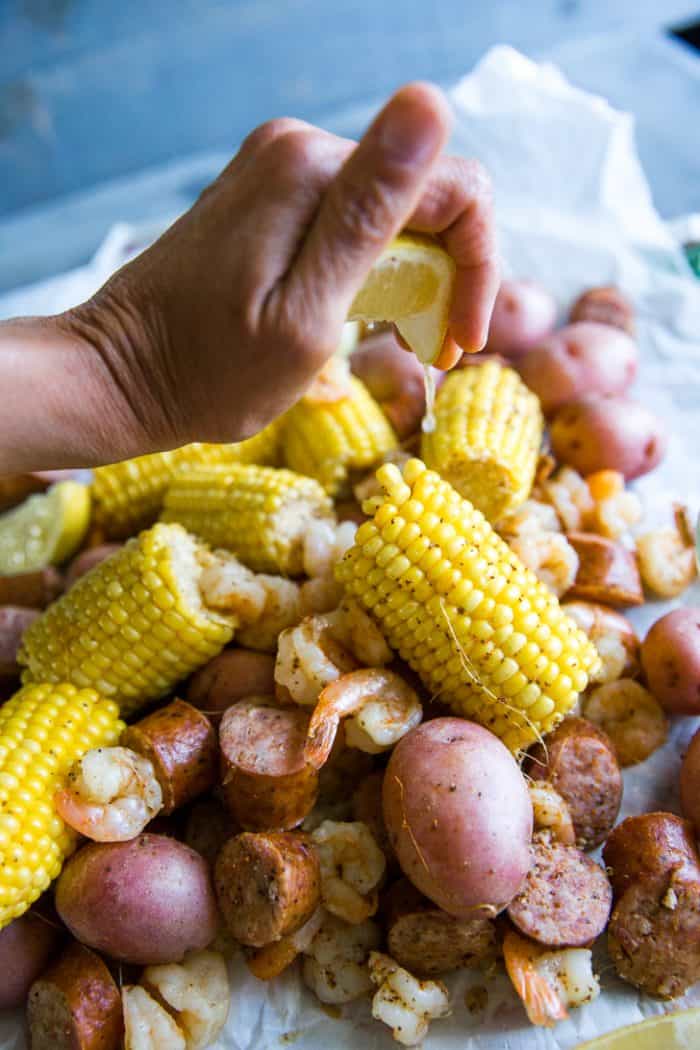 What Do I Need To Make This Shrimp Boil

There are variations to this recipe, but the ingredients I like to use are: 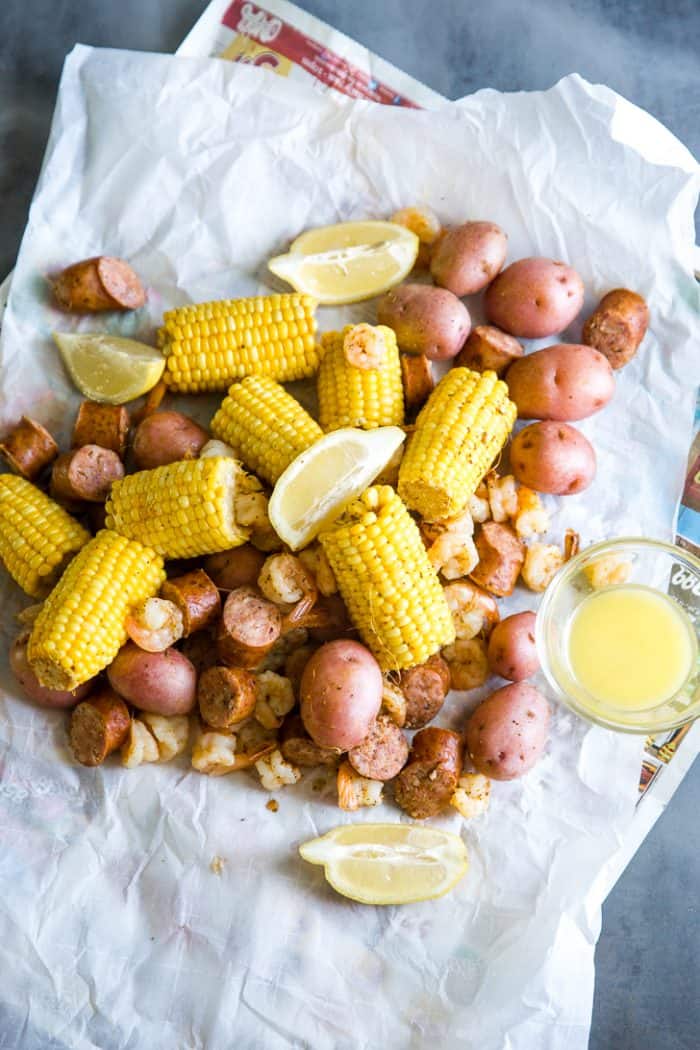 How To Make A Low Country Shrimp Boil

Preparing this shrimp boil is easy, but takes time. It is all about layering in the ingredients.

STEP ONE – Bring water and seasoning to a full boil. Add potatoes and boil for 15 minutes.

STEP TWO – Add in sausage to the potatoes and cook for another 5 minutes.

STEP THREE – Add corn on the cob, cook another 5 minutes.

STEP FOUR – Add shrimp to the same pot and cook until they turn pink, about 4 minutes. Drain pot before serving. 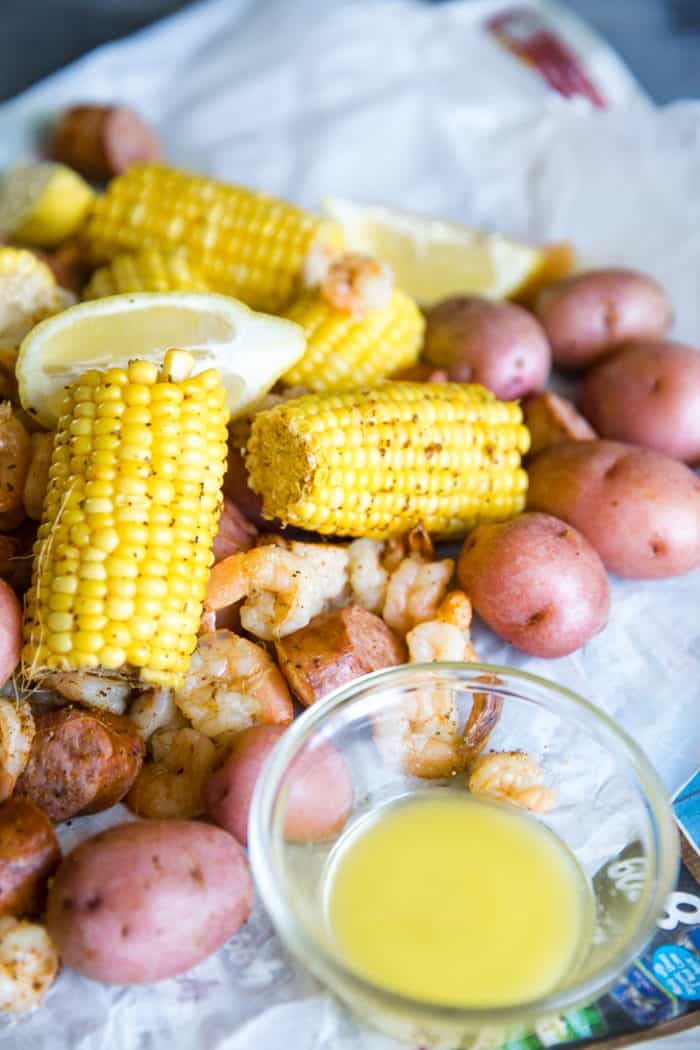 How To Serve Low Country Boil

Traditionally, the seafood boil is dumped onto a table covered with newspaper (easy clean up) and served with lots of hot, melted butter, cocktail sauce and paper towels for cleaning messy fingers!

Can I Reheat A Seafood Boil?

If you have leftovers, place them in an airtight container and refrigate them. They will keep in the fridge for up to three days. Reheat portions in the microwave although shrimp can be a little chewy once reheated. You can reheat the boil in a preheated oven, however, watch the shrimp closely!

You can freeze leftover shrimp boil,however, I would advise against freezing the corn. Corn on the cob that has already been cooked does not freeze well, it gets a little soggy and limp. You can addd frozen corn to the mix after you thaw your seafood boil.

Serve your shrimp boil with tartar sauce, spicy mayo, hot sauce and ice cold beverages! This is a fun sumnertime meal that everyone loves! It is as low maintanence as you can get!

Add the warm flavors of fall to your tea, coffee, pancakes, and cocktails with this easy homemade pumpkin spice syrup. This syrup is very easy to make and always adds a little END_OF_DOCUMENT_TOKEN_TO_BE_REPLACED

This roasted pumpkin hummus will be a big hit during your holiday dinners. Serve this tasty pumpkin hummus up as an appetizer for Thanksgiving with fresh veggies. You can END_OF_DOCUMENT_TOKEN_TO_BE_REPLACED

This creamy no-bake pumpkin pie recipe is no ordinary Thanksgiving pie! It is light and fluffy with the creamiest pumpkin filling. When you are ready to break with tradition, END_OF_DOCUMENT_TOKEN_TO_BE_REPLACED