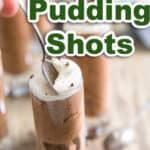 Creamy chocolate pudding shots have a jolt of coffee, a double shot of booze and whipped topping! This is the best way to have coffee AND dessert! Plus boozy desserts are always ready for a party!

I’ve only had true Irish coffee once. At the time, I thought it was way too strong and that the only good part of the whole mug was the dollop of whipped cream resting on top. I was a lot younger then and not the coffee (and liquor connoisseur) that I am today.

It was certainly time to give the Irish coffee a second chance, but this time I enjoyed it as a dessert instead!

What Is Irish Coffee?

Irish coffee is technically a cocktail. I suppose you could start your day off with a steaming cup of spiked coffee, but I wouldn’t advise it!

This cocktail consists of coffee, Irish whiskey, sugar, and a little whipped cream topping. You will find some recipes call for brown sugar, some for maple syrup and some with a little Irish Cream.

It is a great after-dinner coffee drink; a great way to end an evening.

What Are Pudding Shots?

Pudding shots are one of those things that both make and break a party. They make a party because they are fun to eat and are usually quite delicious. They are small but packed with booze which makes them a potent little treat!

Pudding shots are exactly as the name describes, pudding mixed with alcohol. This recipe contains both Irish Whiskey and Irish Cream for a touch of sweetness and to double your fun.

How To Make Alcoholic Pudding Shots

These shots come together so quickly. Mix the pudding mix with milk, coffee, softened whipped topping and Irish Whiskey. You can adjust the alcohol and the amounts added according to your tastes.

The instant pudding should set pretty quickly, which means you can fill your shot glasses.

The simplest, neatest way to fill the shot glasses was by placing the chocolate pudding in zip-top bags, snipping the ends and piping the pudding right in.

Blend your Irish Cream Liqueur and the remaining whipped topping or Cool Whip and place a dollop on each shot glass. Sprinkle each shot with chocolate shaving or chopped chocolate-covered espresso beans.

Why Didn’t My Pudding Shots Set?

One very important thing to mention about making pudding shots is your milk and you whipped topping MUST BE COLD! Otherwise you instant pudding will not set up to be thick enough.

You will have to beat your pudding and cold milk on high speed to get enough air into your pudding to have set properly. Refrigerate your pudding until you are ready to serve them up!

I promise your party will be more memorable with these Tiramisu pudding shots! They are fun, festive and irresistible!

How Long Do Pudding Shots Last?

Pudding shots should keep in your refrigerator for 5-7 days and can be kept in the freezer for up to a month. Allow them to thaw in the fridge before serving.

Can Pudding Shots Be Made With Almond Milk?

Almond milk does not have the fat that cow’s milk has, so your pudding will not set up properly. This will hold true for any milk alternative.

You can use a thickener with almond milk if you are working with old-fashioned pudding that needs to be cooked.

Pina Colada Pudding Shots – This Pudding shots recipe takes a classic cocktail and turns them into individual boozy desserts! These creamy little cups are perfect for parties and friendly gatherings. They taste so good, there is no doubt they will be the life of the party!

Candy Cane Pudding Shots – These festive pudding shots are going to be the life of the party! These boozed-up creamy desserts are fun, easy, and ho ho oh so delicious and naughty!

Add the warm flavors of fall to your tea, coffee, pancakes, and cocktails with this easy homemade pumpkin spice syrup. This syrup is very easy to make and always adds a little END_OF_DOCUMENT_TOKEN_TO_BE_REPLACED

This roasted pumpkin hummus will be a big hit during your holiday dinners. Serve this tasty pumpkin hummus up as an appetizer for Thanksgiving with fresh veggies. You can END_OF_DOCUMENT_TOKEN_TO_BE_REPLACED

This creamy no-bake pumpkin pie recipe is no ordinary Thanksgiving pie! It is light and fluffy with the creamiest pumpkin filling. When you are ready to break with tradition, END_OF_DOCUMENT_TOKEN_TO_BE_REPLACED