This crisp and tangy cucumber salad recipe is a fabulous BBQ side dish, but I can eat it all by itself! One thing about this side dish is it is easy to assemble and always a crowd pleaser! 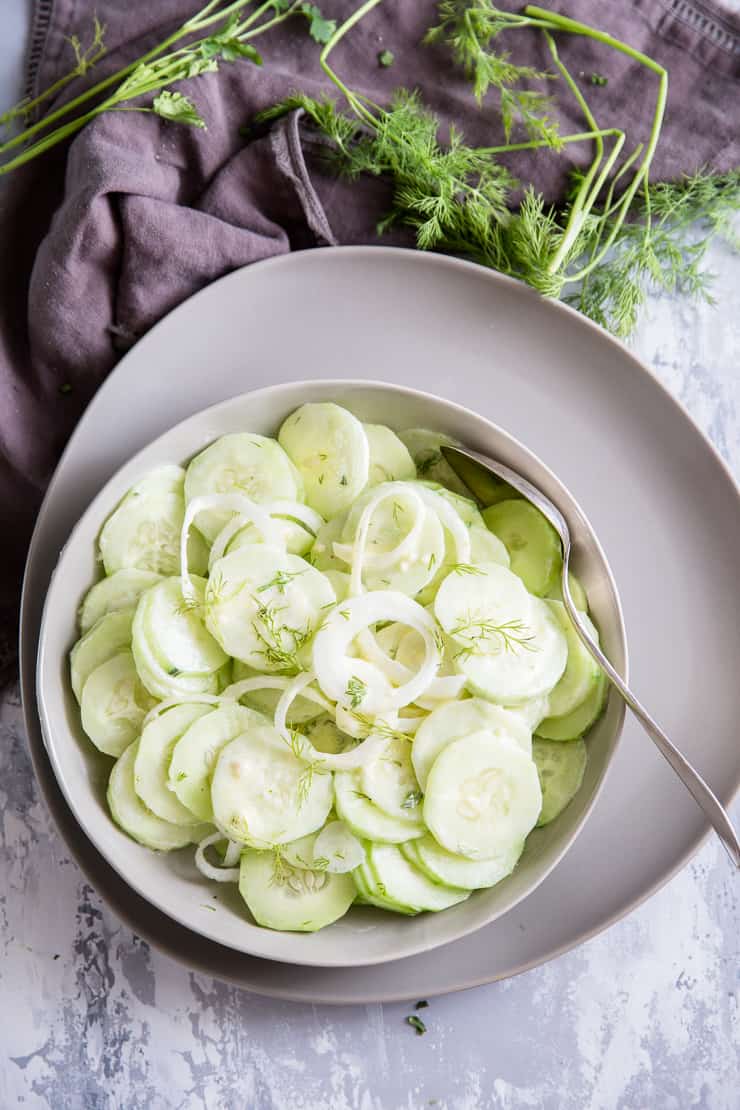 I imagine not many people can say they grew up with a mom who canned pickled tomatoes. No, there are only a select few of us I bet.

I’m not sure how or why she decided that pickling green tomatoes was a good idea. I mean, pickled cucumbers would have been the more obvious choice,

I wasn’t exactly crazy about those tomatoes, but I ate them because they were submerged brine. I ADORE vinegar, I could drink the stuff. This is precisely why I am so excited to share this cucumber salad recipe! 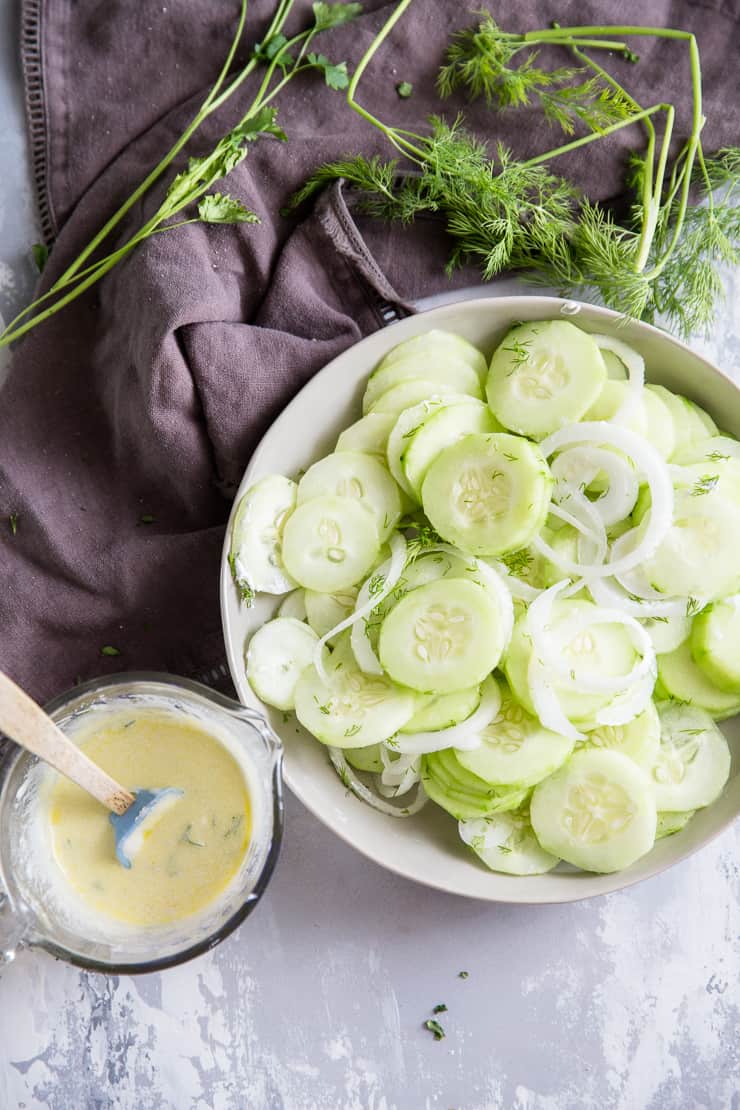 What Is A Cucumber Salad?

Cucumber salad is a popular summer side dish that is usually made with thinly sliced cucumbers and onions.

The vegetables are usually coated in a simple creamy dressing that can either consist of mayo or sour cream.

How To Prepare Cucumber Salad?

I used regular cucumbers for this recipe, but English cucumbers are fine as well.

Peel your cucumbers and thinly slice them. Place them in a large bowl along with thinly sliced white onions. 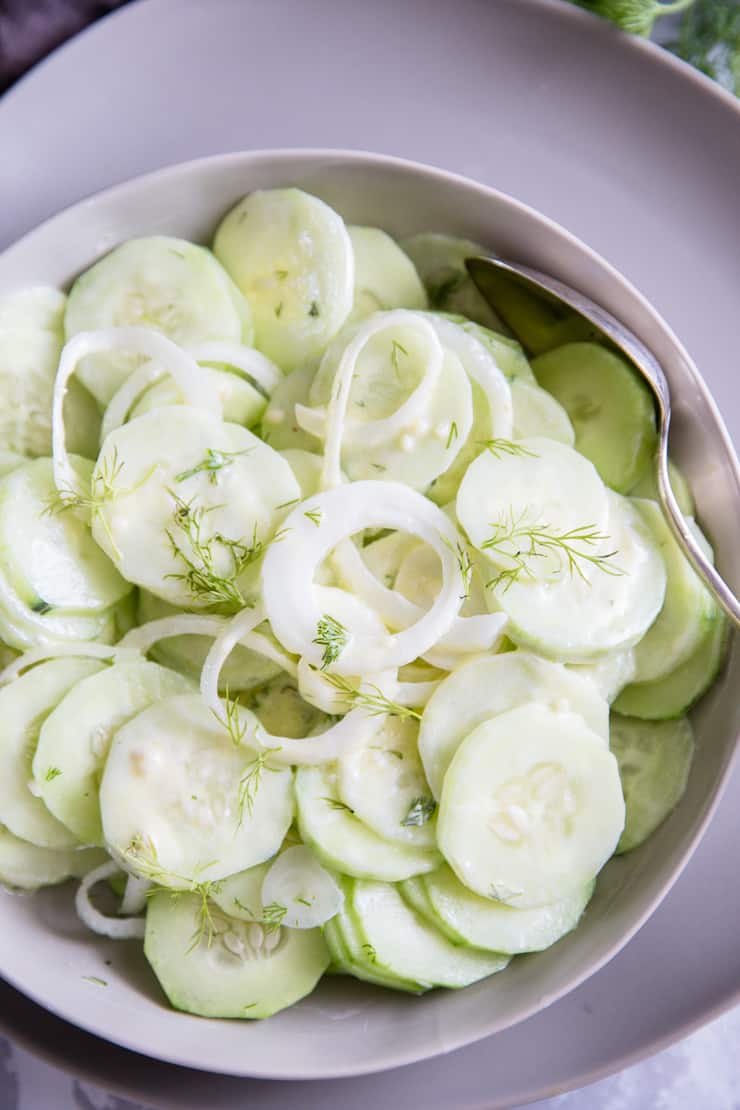 How To Cut Cucumber For Salad?

I prefer to cut my cucumbers thinly, it makes it easier to serve and to eat. But the choice is yours of course.

Can Cucumber Salad Be Made In Advance?

This salad is actually best when it has time to sit. Early prep allows the flavor to come together.

This salad can be made up to 24 hours in advance. If you make it to far in advance, the cucumbers will begin to break down. 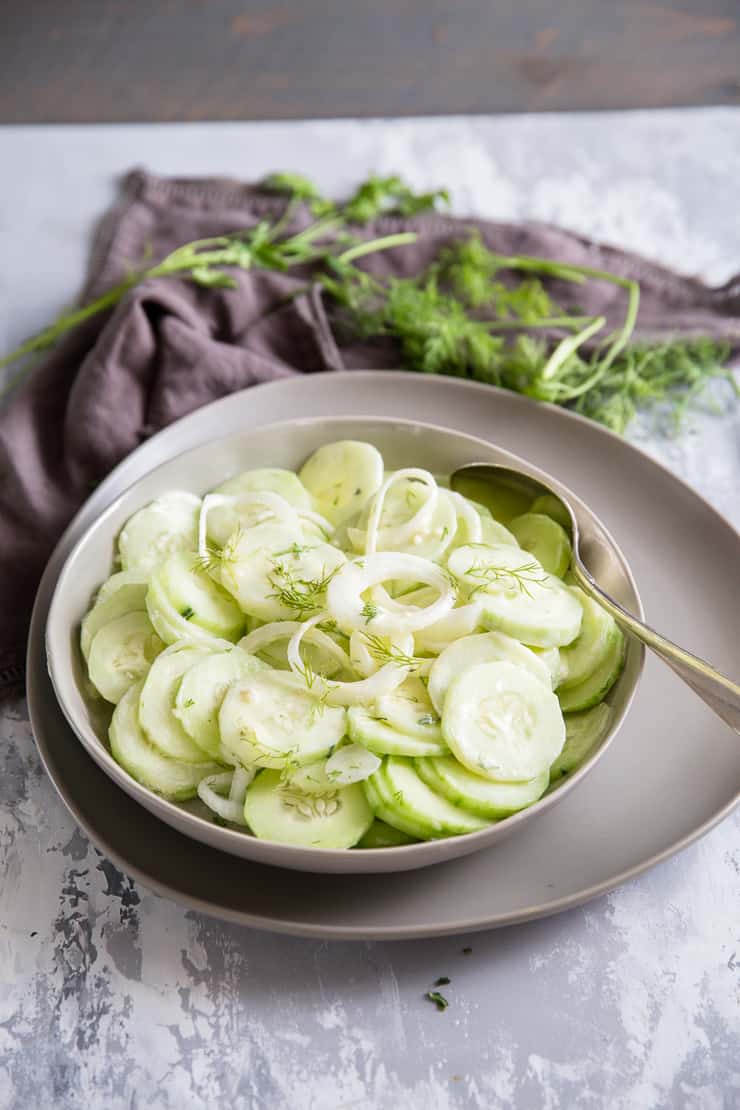 Why Are My Cucumbers Watery?

Cucumber salad, no matter the dressing, can easily become watery. This happens when the crisp cucumbers release their water content after it has a chance to sit.

Greek yogurt is thicker than mayo which is great for cucumbers as it minimizes the amount of liquid in this salad.

Yes! This is great salad to serve if you are watching your carbs! 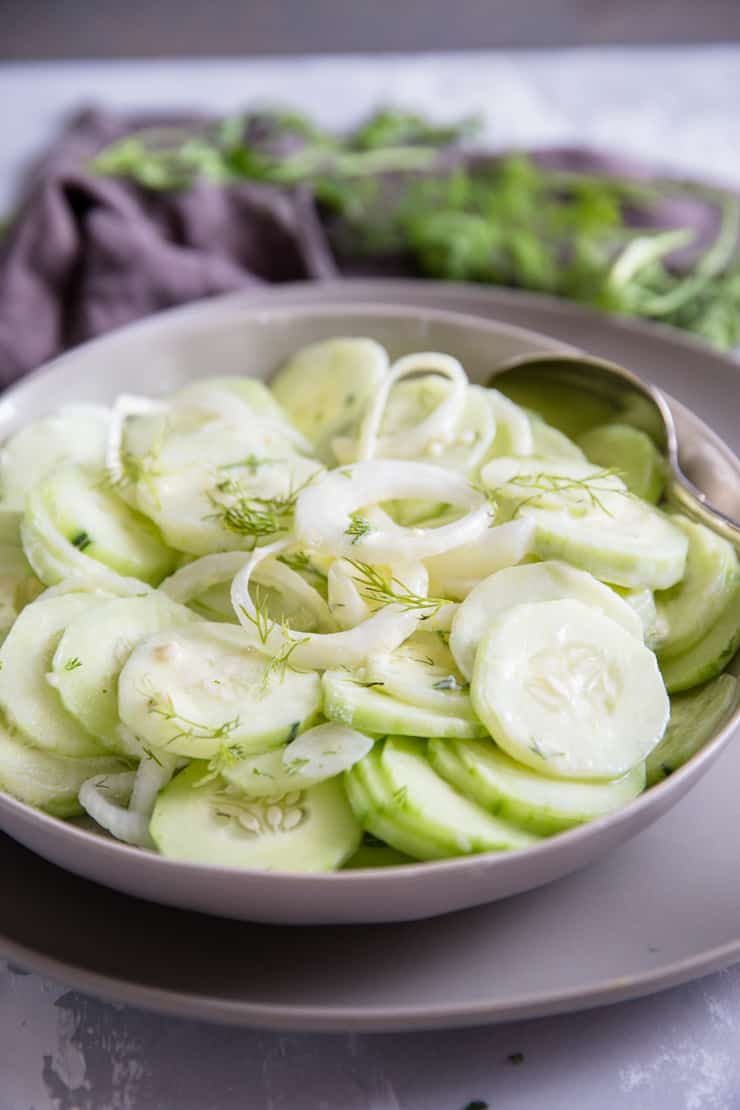 I love using Greek yogurt, but in a pinch, you can use sour cream although the taste will be altered.

Fresh dill will give you the best flavor, but dried will work in this recipe.

For a little added flavor you can use red wine vinegar in place of the white vinegar.

How To Serve This Cucumber Salad

This easy cucumber salad can be paired with almost anything you serve! Try serving it next to

Grilled Tilapia, Turkey Burgers, Lamb Burgers or any hamburger for that matter! It tastes great will hot dogs, bologna sandwiches and grilled chicken too!

Add the warm flavors of fall to your tea, coffee, pancakes, and cocktails with this easy homemade pumpkin spice syrup. This syrup is very easy to make and always adds a little END_OF_DOCUMENT_TOKEN_TO_BE_REPLACED

This roasted pumpkin hummus will be a big hit during your holiday dinners. Serve this tasty pumpkin hummus up as an appetizer for Thanksgiving with fresh veggies. You can END_OF_DOCUMENT_TOKEN_TO_BE_REPLACED

This creamy no-bake pumpkin pie recipe is no ordinary Thanksgiving pie! It is light and fluffy with the creamiest pumpkin filling. When you are ready to break with tradition, END_OF_DOCUMENT_TOKEN_TO_BE_REPLACED